Skip to content
Posted on February 3, 2016May 21, 2016 by kishorepisapati
It’s an exciting feeling to wake up and know you’re doing something for the first time that day; which in my case was exploring a new city on my own.
There was no ground work I did before I left. I had no agenda for the day. I just googled for a minute, and saw that there was a huge park called Kungsparken, and I made a mental note to visit that place.
As I passed silently by the rest of my party deep in sleep, into the Copenhagen railway station, exchanged euros for some Swedish currency and activated my Eurail pass – there was an obvious tingling of excitement. In fact I was so pumped when I sat in my first European train, that I took out my notepad, wrote:

“I’m sitting on my first Eurail, and good lord am I excited! The moment has finally come!” 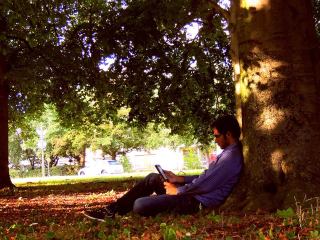 When you see such a place with the Lord of the Rings soundtrack playing, the Shire comes to mind effortlessly. One of my umpteen favorite shots from the movie is of Frodo’s first in the movie, where he is sitting by a tree with his back to its trunk, reading. I call it the quintessential Frodo Baggins shot. And so I whipped out my camera, set the timer on it, and took out the next best thing to a book – a kindle.
It took ten shots and about half an hour at least I think, but I was able to successfully reproduce it – a 21st century tall Indian Frodo Baggins.
The funny and unfortunate part here is that I didn’t actually sit and read there. I just posed for the picture, and set sail soon after for the station. I don’t think I actually read a page on my kindle for the first couple of weeks, though I did fall asleep on trains with a kindle in my hands.
The act of reading is not as simple as I thought it is. With the sheer amount of distractions that our species has manufactured, it is little wonder that fewer and fewer people are found with a book in their hands. “I love books”, and “Reading is my passion” are more loosely thrown around than cigarette butts in Delhi.
As the sun set on my magical first solo sojourn, it became clear to me that I needed to do this a lot more in the next three months.
Have you ever seen an autumn leaf fall? The trajectory they follow before they hit the ground is most wondrous. Every leaf falls differently. Some will fall like a baby being rocked from side to side, and others get carried with the wind.
I felt like a golden autumn leaf that day, caressed by a breeze, dancing into the sunset.