Skip to content
Posted on February 28, 2011 by kishorepisapati
The glass door opened smoothly, despite the trembling hand pushing it. I had just walked into the first interview of my life. The silence was so chilling, I hoped my heart beats weren’t audible.

“Good evening, Sir.” I put on my most humble and confident voice, with a hint of a smile. 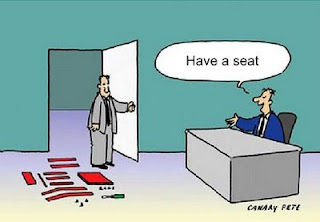 The interviewer told me his name, which I didn’t pay attention to. He ruffled around some papers on his table, probably from the previous interview. “Would you please throw these away ?” I promptly did.

As I settled on the chair comfortably, he asked, “Are you all right with the temperature ? Or you want the AC to be turned off ?”. I honestly didn’t care. “No sir, it’s all right.”

He gestured for the resume in my hand, which I had kept outside the folder. As he started to read my name, I helped him out. “Pisapati Kishore, sir. I’m a south Indian.” I was counting on the name to make him grin. It worked.

Skimming through the second page, he saw my gpa record. “Tell me, why are some students having their grades upto six semesters, and others, just five ?” I wondered whether he was checking my senses, or genuinely interested. “Sir, actually the mechanical and ECE students had their training in the 6th semester, and their results are not yet out.”

“Okay. So, you can start now.” Start? Was there a paradigm? So I spontaneously gave my intro, “I’m Kishore, doing my BE in Instrumentation. I belong to Hyderabad, but since my dad’s in Indian Oil, my home keeps shifting every now and then.”

Everything I said was spontaneous. I just had glanced over the common HR questions before the interview.

The page flipped, and now he was reading my favorite part; the extra-curricular activities. “An editor. Can you explain what kind of editing did you do?”

“Sir, the newsletter’s basically divided into four sections. I was the editor of the most popular one, C.G.P.A. And I didn’t just edit the content submitted to me, I made a few contributions myself too, especially in the gossip section.” “Gossip, I see.”, he smiled. “Yes sir, it needs to be really witty and funny, as it’s obviously the most popular.” He looked impressed.

“Okay, so what would you say is your biggest achievement in college?” I didn’t need to think twice. “Sir, there’s a inter-hostel literary fest held here, called Acumen. I was elected as the representative of my hostel, which meant I was personally responsible for seven hundred people.” I paused for his jaw to drop a few inches. It didn’t. Just the usual head bobbing.

“Events like debating, poetry, role-playing, and some word games are conducted. I not only chose the participants, but entered myself and won my team a couple of events. Plus, there were marks for publicity too, which I handled pretty well. My team and I eventually won the trophy.” There was no mistaking the reassuring nod this time. I was completely relaxed now.

He skipped over the theater part, and read the last line. “Football.” “Sir, whether it comes to TV, computer or  real life, football is..” He broke me off, “Do you think Liverpool will win this league?” That caught me off guard. Despite it being an interview, there was no way I’d say it would. “No sir, their performance has been dismal this year.”
“Hmmm..did you watch yesterday’s match? I can’t remember..” He tried to recall the outcome, but it seemed outlandish. Was he faking it ?

“I did, sir. It was against West Brom, I think. Torres scored the winner. It was a fantastic volley.”
“Ahh.. yeah yeah!” Being a United fan, I couldn’t believe I had watched it.

“So Kishore, why do you want this job?”  What was that ?! I felt as if someone had dropped a bucket of ice cold water on my head all of a sudden. “Firstly, sir I want a non-tech job. Secondly I’ve heard a lot about how valuable the work experience from this company could be. And I really appreciate the fact that gpa is not a criteria for..” He cut me off, “Okay, what was your favorite subject then?”

This was the only answer I’d decided before stepping in. “Total Quality Management, sir.”
“TQM…are you familiar with the probablity curves?” It took a moment to sink in.
“Oh, you mean probability distribution? Yeah, somewhat.” Surely he wasn’t going to ask me the theory?
“Okay, Kishore. Ever seen a mustard seed?” He couldn’t be crazy. Probably hungry, I thought. “Sure sir.”

“So there’s this refill manufacturing company. Mind you, refill, not pen. What they do is, they have a huge vat of ink, from which the ink flows into the plastic tubes to be made into refills. Two months ago, a mustard seed fell into that vat. It’s just thick enough to enter one refill. I bought this pen yesterday. Find the probability that the seed is in this pen’s refill.”

Yeah, there was no time to curse myself for saying TQM. I took a rough paper, drew my pen out like a sword. As if I’m playing an ancient warrior who got confused whether it was Lord of the rings, Gladiator, or Troy. I thought I’d better start asking some questions, and work it out slowly.

“Umm..what’s the volume of the vat, sir ?”
“Ten thousand litres. And consider the refill volume to be 20mL.”
“And how much time does 10000 litres take to be used up?”
“Once in a month.”
Ten thousand divided by twenty. “No, you’ve got it wrong.”, he interjected. Then I noticed the unit inconsistency, and said, “I’m not done, sir. “, multiplying the 10k by another thousand.

“Ha ha, okay. Kind of reminds you of those molarity concepts from twelfth. Do you recall them?” I was an ace at chemistry. And there were some things you could never forget. “Of course, sir.”
He then asked me the formulae for molarity and molality, and asked them twice, trying to wound me up. But the mind is always racing when you really need it to be, and he was satisfied with my answers.

“Sir I was wondering, to how many companies these refills go to?” This was the most critical question, I think. Not many would have given it a thought.

“First step, obviously, sir, would be 1/(no. of total refills). Since it would be shipped to four different companies, we’ll multiply it by 1/4.” With his approving expressions, I continued. “How many cities is the ink going to get shipped to, sir? “Let’s say a hundred.” Multiply by 1/100. I did not consider the different shipping process for each company.

“And where did you buy this pen?”
“Here in Patiala.”
“Since you chose one of the four companies, multiply by another 1/4. And let’s assume the number of stationery outlets in Patiala are..”
“Enough, enough! That will do. It was a pleasure meeting you.” He was smiling. So was I.

I’d left my bag outside the hall, in the corridor, with no one watching it. It had both my wallet and cellphone. Precarious, but that’s the way I live. Forty minutes, I was in there. Felt like ten to me.

The shortlist for the interview next morning was due in an hour or so.Back in my cluster, I waited, while narrating the story of my first interview to my friends, like a grandfather to his grandchildren. I just had a great date. Who cares whether I’d have a second one?
The world is full of possibilities.

7 thoughts on “Episode 1: The First Interview”